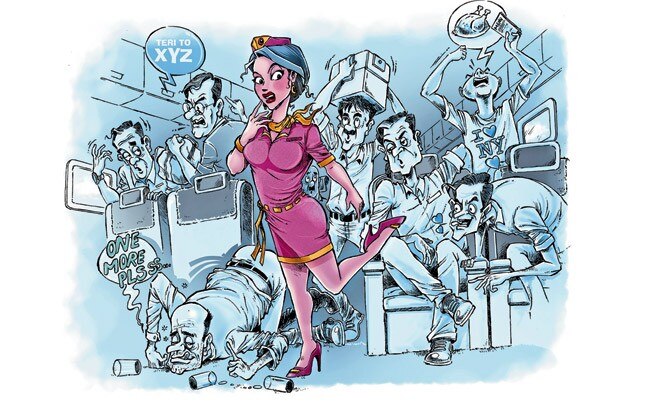 Oh, please excuse me while I go on a rant here!

Air travel was like being in a five star hotel some decades back. Flying used to be a treat in itself. Passengers would dress up; skirts and heels for women, coat and often a tie for gentlemen.

Good hot meals along with beverages were usually included across all classes of travel and the service was impeccable and served with a cloth napkin and real silverware—spoon, fork and yes, a sharpened knife.

I am talking about the 70’s and 80’s here, when flight travel was not so common, but exciting and very special for flyers.

And the best part, travellers behaved!!

Today, air travel is the most popular method for traveling. And as more and more people take to the not-so-friendly skies, what with the fares being as competitive, stories of rude, disgusting and selfish behavior of many a ‘first time air traveller’ abound.

And as for a dress code, its non-existent; with many passengers dressing as if they are headed to the beach or about to go back to sleep in their dirty sloppy PJ’s no less. They get on planes and decide to behave in ways that drive you beyond your limits of tolerance.

Err, excuse me but the airplane is not an extension of your home. You are travelling  with 200 strangers. When the captain says “Relax and enjoy the flight,” this does not give you the permission to start behaving like you own the airline and start treating staff with utmost disrespect.

From changing their baby’s diapers on the dinner trays — leaving the soiled ones in drink cups for the cabin crew to take away, from  either cramming their cabin baggage in the overhead bins or stashing it away under your seat, from reclining their seat almost into your face, from refusing to turn off the smart phone, from kicking the seat in front, from playing loud music in cabin, from smoking in lav, from inappropriately touching the cabin crew to sticking their bare feet on your armrest from the seat behind you and of course how can you forget ‘mommy’s darling’ who runs across the aisle causing pandemonium across the plane. 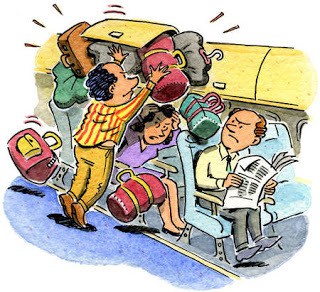 And don’t even get me started about the passenger seated in the middle seat. A lot of passengers rate the battle for the armrest as one of their very greatest peeves. The battle for arm rest superiority has long plagued travellers, with awkward social etiquette and downright confrontation. If the window seat gets the far armrest, and the aisle gets their own, what’s the story with the middle? Well last I heard that Jetstar, in a press release announced that the middle seat is entitled to both armrests – and that’s final.

Well if you are seated on either corners, I pray you are not literally on a flight to hell.

Badly behaved passengers are obnoxiously present world over and in general gross behaviour is unfortunately, becoming the norm.

But what, though, can you do about it? Yes, you can complain to a crew, who may be reluctant or even powerless to stop certain passenger behaviors, however, you try and politely just bear it without even grinning.

But seriously, Why are passengers behaving badly?

Are we becoming a nation of rude narcissists? Basic, decent behavior has been lost with day-to-day living in a bubble where you feel like YOU are the most important person on this planet. The sense of entitlement and privilege is exemplified by the thought: “I want to do what I want, when I want…. and I will!”

And to make matters worse this bad behavior is contagious. The ‘If he can do it, why can’t I?’ mindset continues to flourish and our “It’s all about me” society continues to rumble out of control.

Don’t you think it’s time that Airlines need to have a ‘dress code’ so passengers will know ahead of time what will fly and what won’t. And maybe include a ‘behaviour code’ as well in their contract of carriage and acceptance of passengers.

However as a fellow passenger there are certain things you can do and follow these common sense guidelines:

When the meal service is on, with trolley carts in the aisles, its best to avoid making trips to lavatories unless absolutely important. This helps both, the crew and other passengers too. 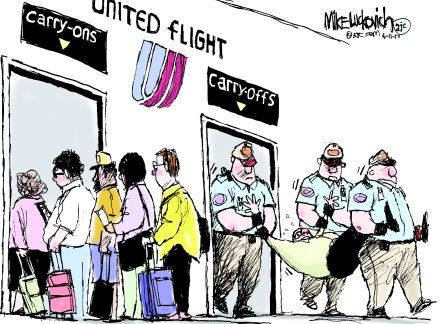 Tension between cabin crew and passengers often arises from the strict safety directives on board. Though passengers may find them restrictive, crew members must ensure that safety rules are abided by. After all, cabin crew are on board primarily for passengers safety along with the service ,but it has been taken for granted by lot of passengers thinking that cabin crew are mainly at their beck and call. 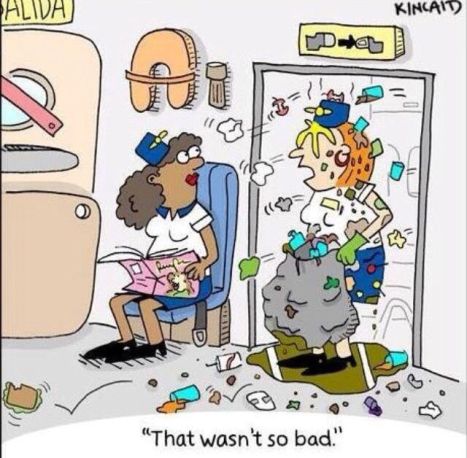 Are we really living in this world of arrogant and egoistic passengers where basic etiquette are forgotten by some of our esteemed passengers? You may have read about the case of an Irish passenger who spat on an AI crew for not serving more alcohol, in Business class, last November and was arrested on landing. Well, she was finally convicted of assault by a British court, early March.

Many countries ‘blacklist’ unruly passengers from flying. Our Ministry of Civil Aviation has recently come out with guidelines for such passengers on Indian domestic flights. Unfortunately not a single passenger has made it to that list. What a shame!