Using ‘Solar Power’ is increasing in popularity because it is versatile with many benefits to people and the environment. Every day, the sun gives off more than enough energy to meet the whole world’s energy needs. And since it is a clean source of energy there are no greenhouse gas emissions that are released into the atmosphere. Hence the environmental impact of solar power is significantly smaller than other power generation methods.

Addressing the issue of sustainable travel, Solar energy systems are increasingly being installed on the roofs of airport terminals and parking garages, as well as on the land surrounding tarmacs to harness the power of solar energy.

In 2015, Cochin International Airport in Kerala set an example for the rest of the world by contributing towards the environment, and being the first ever fully solar powered airport. Handling more than 10.2 million passengers in 2018-19 the airport was selected in 2018 for the coveted Champion of the Earth award, the highest environmental honour instituted by the United Nations. 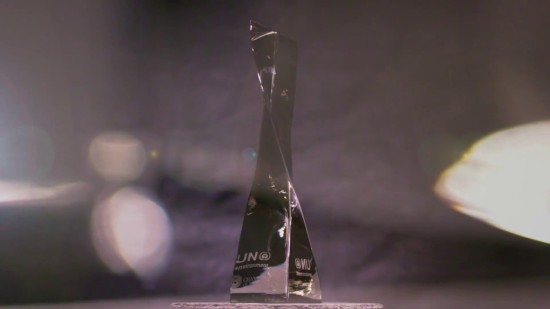 The airport has reduced the carbon footprint by over 3 lakh metric tonnes, which is equivalent to planting 3 million trees. Moreover, the airport is going one step ahead by generating electricity with eight small hydroelectric power projects and organic farms in the vicinity. Over the past few years, it has grown around 80 tonnes of organic vegetable in a year. 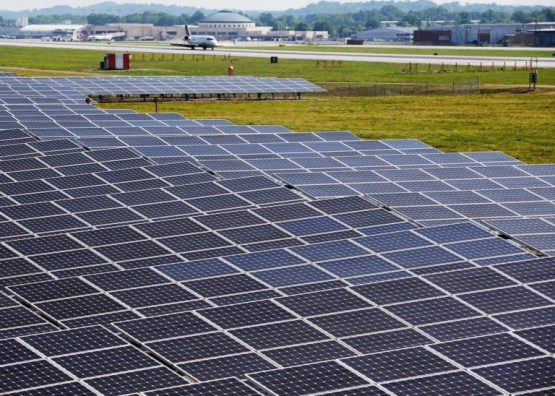 In the US, an airport in Tennessee is now generating enough renewable energy to meet all its energy needs—a model that is soon replicated by other airports. The airport of the future, Chattanooga Metropolitan Airport, has become the first airport in the country to generate all the power it needs through a solar farm. 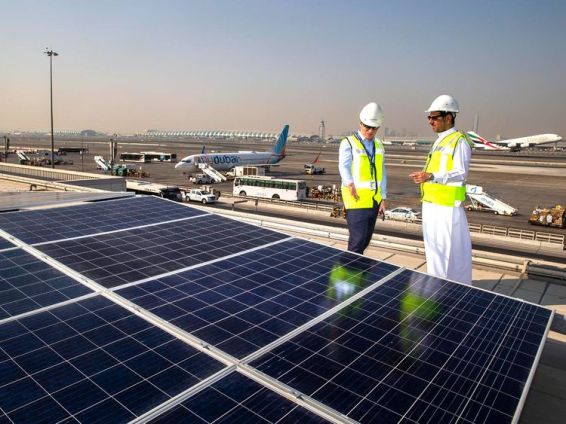 The trend in airports incorporating solar panels into their energy systems is taking off. –Athens International’s photovoltaic park produces more than 13 thousand MWh of emission-free electricity annually, corresponding to approximately 25% of the airport’s own electricity needs. This results in an average annual CO2 emissions reduction of 11,500 tonnes

A solar energy system made up of 15,000 solar panels was recently installed at Terminal 2 of Dubai International Airport.

Denver International Airport has an impressive facility of a 56-acre, 10-megawatt solar farm with 42,614 solar panels.

Kuala Lumpur Airport in Malaysia has the 19 megawatt plant which will help save the airport $750,000 in electricity costs and some 18,000 tonnes of CO2 each year.

And speaking of airports, I wonder how soon it will be when we see commercial aircrafts using this renewable source of energy to fly.  Although quite a few manned and unmanned solar powered aircraft have been developed and flown in the last 30 years.

When the Wright brothers made their first maiden flight in a powered aircraft on a wind- swept beach in 1903, it was a short hop, skip and jump into the record books.

More than 70 years later the 1st  solar powered aircraft, The “Sunrise 1”, an unmanned vehicle -designed by Ray Buchard, on the 4th of November 1974 made their 1st maiden flight and flew 20 minutes at an altitude of around 100 m.

In July 2016 with a journey that took a very long time—505 days to fly 26,000 miles (42,000 km) at an average speed of about 45 mph (70 kph) pilots Bertrand Piccard and Andre Borschberg successfully landed the Solar Impulse 2 aircraft in Abu Dhabi ,after flying around the world using only the power of the Sun.

A selfie shows Swiss pioneer Bertrand Piccard during the last leg of the round the world trip with Solar Impulse 2 over the Arabian Peninsula on July 25, 2016

Although many of the solar powered aircrafts have wingspans as wide as the 737 passenger jets, but the similarities between them ends here.

Solar-powered planes present some “engineering challenges.” They are able to capture about 10 or 20 percent of the energy from the sun. That equates to a speed of only 50 miles per hour, whereas commercial passenger jets, travel at about 600 miles per hour.

So for now solar-powered aircraft are probably better suited for things like loitering over one area, collecting data for climate research, or conducting surveillance with cameras, than for moving people around.  But with technology evolving everyday it won’t be too far into the future when we see a “small seater solar powered commercial flight” taking off on its voyage. But for now that remains a dream!