Varanasi also known as Benaras or Kashi, one of the oldest continuously inhabited cities in the world, and is regarded as the holiest place in the world in Hinduism.

According to legend, the city was founded by the Hindu deity, Lord Shiva, around 5,000 years ago, thus making it one of the most important pilgrimage destinations in the country.  In Hindu cosmology, the city is considered the, “center of Earth”, and most religious activity here occurs around stair structures called ‘Ghats’.

Mark Twain described Varanasi as “older than history, older than tradition, older even than legend and looks twice as old as all of them put together”.

Varanasi is a bridge or ‘tirtha’ between heaven and earth, a crossing point where Gods visit this world and mortals travel to the next. The city is known for its belief that any one leaving his / her mortal body here, goes to heaven in their afterlife. Its location on the banks of the sacred Ganges River also contributes to its prestige as an important site of pilgrimage.

There is possibly not a single month, when Varanasi is not preparing or in the midst of a festival. The city celebrates its festivals with such zealous fervour, that it is difficult not to get drawn into the carnivalesque atmosphere. Pick any month and you will find some festival to plan your trip around. There is never a dull moment in the city.

The city known as the spiritual capital of India, has one of the most important Shiva temples in the country and hence it’s quite natural that Maha Shivaratri (the wedding of Shiva & Parvati) is celebrated here in a grand manner. Mahashivratri, “The Great Night of Shiva” is considered the most significant event in India’s spiritual calendar.

The festival sees more than a million Hindus from all over India, converge at the Kashi Vishwanath Temple, one of the most famous Hindu temples dedicated to Lord Shiva.

The city is thrown into frenzy as hundreds of small troupes carry bedecked Shiva idols in processions to the Shiva temples. The preparation starts early in the morning with a parade that starts from and ends at the Tilbhandeshwar temple. The procession lasts roughly about 5 hours and it is celebrated with loud music in the background and people consuming Bhaang (a form of marijuana legal and common in Varanasi) and dancing in the procession. As marijuana is considered as the blessing of Lord Shiva, a lot of people do it here for religious reasons. After the procession, everyone returns back to the temple, offers their prayers and perform rituals.

Out of the 88 Ghats in Varanasi the most popular one is the Dashashwamedh Ghat. It attracts a large gathering every evening, when a group of priests performs a synced ritual known as Ganga aarti -to praise and pray to Goddess Ganges with lights, Conch sounds and bell ringing along with Vedic chants.

The aarti is always carried out facing the river Ganga. It starts by lightning up the multi-tiered brass lamps, along with a well synchronised chanting of mantras and blowing the conch shells. The shells are known to sanctify the atmosphere. The other remaining priests light the incense sticks and offer it to the goddess in a clockwise circle. 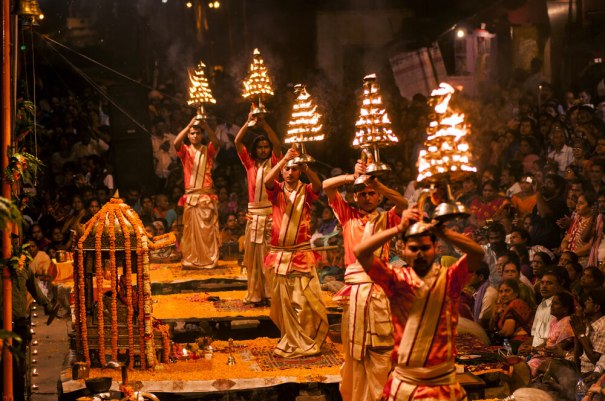 Witnessing the Ganga aarti is no less than a spectacle. The energy around this daily ritual fills your core with peace and tranquillity.